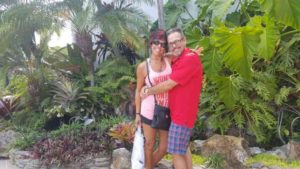 Life is Great after HIFU

Coming from a family tree full of the disease – Ron's  father, uncle and oldest brother had prostate cancer – he knew his chances were high to also have it at some point in his life, becoming one of the one in seven men who have the disease in their lifetime.

After a suspicious prostate-specific antigen (PSA) test result in February 2016, Robledo’s physician suggested he come back in six months to check it again, but he knew better and pushed for a biopsy. Prostate cancer was detected.

Robledo says his urologist is a surgeon and suggested surgery. Robledo began to research his options and considered proton radiation, which he believed would be better than surgery, but he knew radiation had its own side effects.

Then an acquaintance told him about high intensity focused ultrasound (HIFU) therapy and highly recommended it. This friend had HIFU to treat his prostate cancer in 2015, and had to travel outside the U.S. for the procedure, as it had not been FDA cleared yet.

“Once I started looking into HIFU and learning of its benefits, I discovered it made perfect sense and was the best way to go about handling my cancer. I’ve waited my entire life for this point – I have 20- and 23 year-old grown sons so my wife and I go away for three day weekends and have our marriage and lives again; I was not willing to have some physician go in and take my prostate out with all the complications it comes with – sexual inability and incontinence. I believe life should go on and be kept as normal as possible.

I also chose HIFU because I can have it done more than once. On April 28, 2016, I had my procedure and only about one-third of my prostate was ablated. My HIFU physician, Dr. Stephen Scionti, explained that there is a 40 percent chance I could eventually get prostate cancer on the other side of my prostate, but that is fine because I can choose to have HIFU again, which I could not do with other treatment options.

Being a business owner, HIFU also made sense because I did not have to miss 40 days of work by having radiation, which would have meant treatment five days a week for two months.

As for my procedure, nothing could have gone better – everybody was spot on. After coming out of anesthesia for 1.5 hours, my wife and I went to the car and I gobbled up a sandwich before we even left the parking lot. Within two hours I was in the Gulf of Mexico catching whiting.

I stayed in Sarasota until my catheter came out four days later. There was no pain – it was weird having a catheter and no pain; it didn’t stop me from doing anything.

People who know me and see me daily do not believe I had a procedure because they say I look great. It was a two hour cat nap and that was it.”